TCD and then Vote No:

Were a murder committed, an eccentric British investigator called, a cooky professor implicated, and a star "maths" student expelled for some silly reason, the whole thing would be filmed at this place: 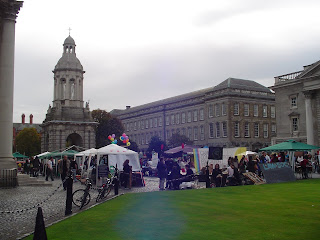 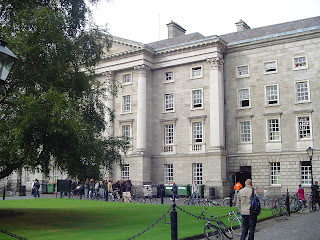 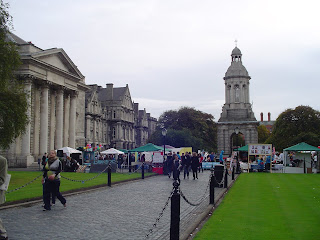 Sitting on a bench reading something about connectionism (the answer to all cognitive questions) I was asked by a homeless man, "How come when I steal from my boss, I go to jail...but when he steals overtime, tips, and raises from me, the economy goes up?"  Good question!  Which brings to a tid-bit of current Irish politics: The veritable Lisbon Treaty!  Ireland voted against a treaty that would broaden it's ties to the EU by providing it with a partial voice on a EU economic council, among other things.  Now the same vote is back, because the folks in power think Ireland got it wrong.  Far lefties, like the anarchists, socialists, Sinn Fein, Greens, and People Before Profit, along with far right nationalists are against the treaty.  The lefties are generally opposed to globalizing economies, which they see as largely responsible for Ireland's economic collapse, while the nationalists see EU involvement as European (and probably UK) capitulation which would of course be the ruin of Ireland.  Centrists from Fine Gael and Fine Fail are promoting the treaty and mainly responsible for it's re-appearance on the ballot.  In my opinion, I'm with the lefties.  It strikes me that economic treaties, such as NAFTA, CAFTA, and this Lisbon treaty (smaller but similar) erode workers' rights by consolidating markets across borders where less protective and increasingly opportunistic companies can exploit human labour.  It is, however, a fine line.  There are no jobs in Ireland.  Not a single one.  A treaty, as proposed, would indeed create jobs, which is important, but at the cost of devaluing new and existing employment, and more importantly devaluing labour in general.  I'll stick to the socialist party line on this, and pretend to vote no.